The Mellot dynasty was founded in Sancerre almost five centuries ago by Pierre-Etienne Mellot and, since then, the family has always been involved in winemaking. In fact, in 1698, César Mellot, was entrusted with the weighty task of advising King Louis XIV on his choice of wines. Throughout the years, each new generation has continued to enrich and perfect the family's winemaking skills.

When Alexandre Mellot took over the family estate he decided to extend the vineyards, modernise the winery equipment and give a new impetus to export sales. In 1987, he was joined by Catherine Corbeau, who took charge of the sales and marketing operations.

Together, they developed new strategies for both the viticultural and marketing activities and steadily bought more vineyards in order to be totally in control of their supplies. Today, Joseph Mellot is the only estate that owns vineyards in all the appellations of the region. The vineyard area now extends over 85 hectares: 30 in Sancerre, 24 in Pouilly-Fumé, 14 in Quincy, 11 in Reuilly, 2 in the Coteaux du Giennois and 4 in Menetou-Salon.

Over the years, Alexandre and Catherine developed a number of fruitful relationships with other wine professionals, who have also contributed to the continued success and development of the company. 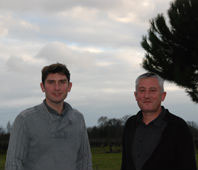 The Château La Tarcière was bought in 1883 and it has been at the Bonnet family since. It is situated in the Nantes vineyard in the appellation of Muscadet Sèvre et Maine.

The land property around the Château was planted with vines but also with cereals but year after year the vines took over the whole property of 40 ha.

Today the domain is run by the two brothers, Jean Jacques and Rémy Bonnet. Their major concern is the work in the vines !

They have always been for sustainable farming but since 2005, they decided to move further and convert 20ha out of 40 to organic farming.

Their next goal is to make the total of 40ha organic !

The meticulous work in the vineyards as well as in the cellar is reflected in the quality and purity off their wines !