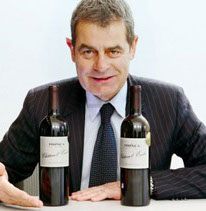 The Château l’Enclos is situated in the Sainte-Foy Bordeaux classified as Appelation Controlée AOC area bordering the left bank of the Dordogne River, at the exit of Sainte-Foy la Grande, along the Bergerac - Périgord route. The estate is 40 hectares, including 24 hectares of vines.

The Château was built in the centre of the property and has a core foundation dating back to the XVIIth century.

The winery and storage cellar are housed in a structure built in the XVIIIth century and lie at a right angle to the château.

The territory is composed of parcels located mostly on the surrounding slopes and heights, on soils derived from the lacustrian limestone of Castillon, hard, magnesian, with clays of very high quality and passages rich in oxydised iron.

A great wine enthusiast and amateur, Eric Bonneville, after having founded and directed an important asset management society, decided to again take up a viticultural domain.

During the summer of 2002, he fell, along with his wife Isabelle and their two sons Julien and Romain, under the charm of the Château l’Enclos: a heartbeat decision to live out their passion for wine